X
Back to the top

The world is cold, indeed. But thankfully, Cookin’ On 3 Burners bring the antidote with their new single. After the longest touring and recording break in their 24-year history, due to Melbourne’s strict COVID-19 lockdown, Jake Mason (organ), Dan West (guitar) and Ivan Khatchoyan (drums) reunited to cook up a blazing new release. And it’s anything but cold.

Continuing on their tradition of collaborating with guest artists, this new outing partners up Cookin’ On 3 Burners with hip hop icon Mantra and vocalist Jane Tyrrell. Spitting lyrics that feel more relevant than ever, “The World is Cold” is a call to fire up; to re-ignite and forge ahead with purpose and conviction.

In true Cookin’ On 3 Burners style, this record sits just as comfortably on an audiophile’s turntable as it does on a B-boy’s Boombox. The B side is an addictive rendition of Mos Def’s 1999 release “Ms. Fat Booty”. A strong return to Cookin’ on 3 Burners roots as an instrumental funk trio, this cut references Aretha Franklin’s 1965 “One Step Ahead” release, the track originally sampled for the Mos Def classic. It follows a suite of super funky interpretations recorded by the band including Gary Numan’s ‘Cars’, Metallica’s ‘Enter Sandman’ and Gorillaz’ ‘Feel Good Inc’. 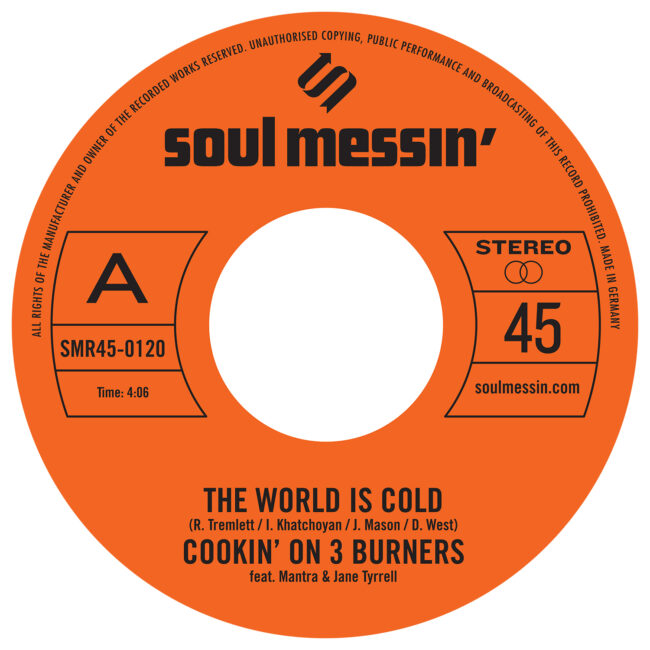